A few hours ago, the photos below picturing a mysterious sigma camera were published on Sigma-Rumors. The caption on the lens and front suggest a successor of the DP2 Merrill. Except for the 30mm f/2.8 lens, the DP2 Quattro doesn’t seem to have much in common with the DP2M. The design looks highly futuristic and is reminiscent of Sigma Global Vision lenses from the Art, Contemporary and Sports series. The arrangement of the controls differs fundamentally from any other camera Sigma produced so far. Compared to the DP2M, the Quattro appears to be very small and slim, yet very wide.

According to Sigma-Rumors, the Quattro is equipped with a new processor called True III and a much bigger battery. The battery-compartment looks very big. 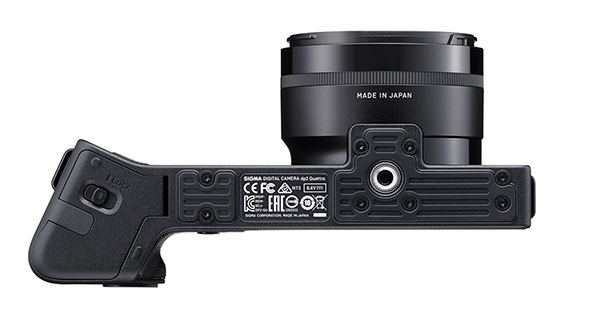 The optional optical viewfinder that is attached to the flash socket:

What puzzles me is the label “dp2” on the front side. First, no DP ever had its label on the casing as far as I know, you always had to look at the label on the lens to figure out which DP it is. Second, Sigma only used capital letters so far. In brochures and marketing slides, only labels such as „SD1“, „DP1“, „DP2“, „DP3“ were used, not “dp2”. Furthermore, the Quattro lens has a filter diameter of 58mm, while the DP2M one has a filter diameter of 49mm. The lens barrel is largely overdesigned for a 30mm f/2.8. For these three reasons, I am slightly skeptical. In a few days, the CP+ will open its doors. We’ll know more on Thursday at the latest. 🙂