In the first part of this comparison I tested the sharpness of the two cameras, or rather of the two lenses, at a very short distance to the motif (~1.8m). Even though the 50/2.8 is an extraordinary lens, it had to bow to the “beast”. The 50mm 1.4 DG HSM Art, being much bigger, much faster and more expensive, produced noticeably sharper results not only at the same (e.g. f/2.8 vs. f/2.8), but also at the respective maximum aperture (f/1.4 vs. f/2.8).

Since hardly any lens has a constant level of image quality across the entire distance range, the cards are being reshuffled for this second part. Below we will see whether the 50/1.4 Art will be able to maintain its lead when shooting motifs which are further away from the camera (landscapes) and whether the 50/2.8 will be able to increase its image quality despite its “macro-like” lens design. 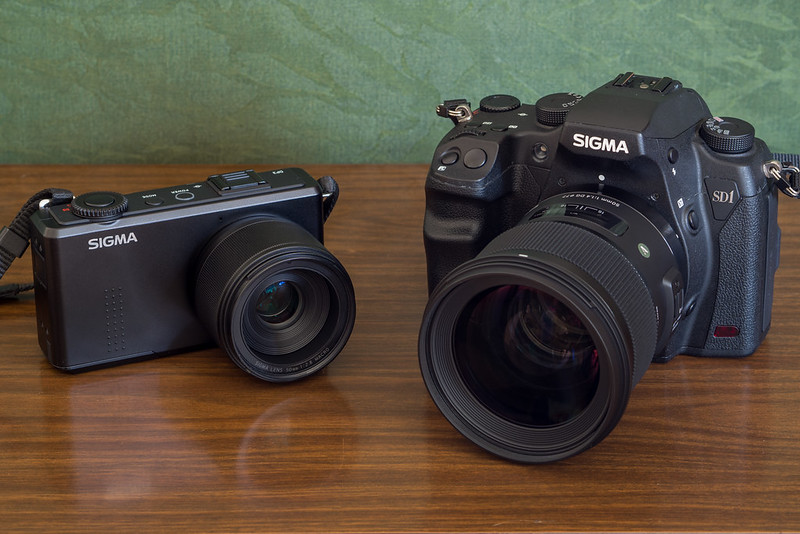 But first, a few words on my procedure and test setup. All photos were taken on a tripod. Self-timer was used for the DP3M (2 sec delay), and for the SD1M the mirror lockup (also 2 sec delay) was used. I have taken great care to capture the same FOV, which, however, I have not manage to do. At such a distance to the motif, one millimeter on the tripod base plate can make a huge difference. Both cameras were focused manually. The X3Fs of both cameras where processed in the same way. All settings in SPP were left on 0, including sharpness. Noise reduction was deactivated, and since the cameras did not agree in terms of white balance, this, too, was set manually. After exporting the 16-bit-TIFFs from SPP, I polished the pictures in Lightroom, which is to say that only the settings in the develop module were tweaked a little and the white balance was fine-tuned, so that all pictures look as similar as possible. Even though both cameras have a Merrill-Foveon-Sensor, the firmware seems to interpret colours and tonal values slightly differently which, unfortunately, makes this step necessary.

Let us now move to the comparison images. Since the crops are too big for the blog entry, the blog-software scales them down and thereby converts them into pixel mush. Please click on the crops to open them in a new browser tab in full size.

Like the last time, I am going to make this summary short as well. At f/1.4 and f/2, the 50/1.4 Art is softer than the DP3M both in the middle as well as at the image borders. If the Art is stopped down to f/2.8, the sharpness in the middle is the same, however, in the corners it is slightly sharper than the DP3M at f/2.8. At f/4 and onwards, the DP3M is always a teeny-tiny bit sharper than the 50/1.4 Art at the same aperture – over the entire image. One has to look very closely though.