There’s no doubt that drone photography and a bird’s eye view which is becoming more and more popular have been a clear trend in the world of photography for quite some time.

No wonder because they allow you a perspective that human-beings aren’t likely to experience otherwise.

It’s these new perspectives that form the work created by Johnny Miller. In his last projects the photographer has dedicated himself to drone photography and what he shoots isn’t breathtaking sceneries or spectacular images in cities. With his photos he rather highlights the striking contrasts between rich and poor. 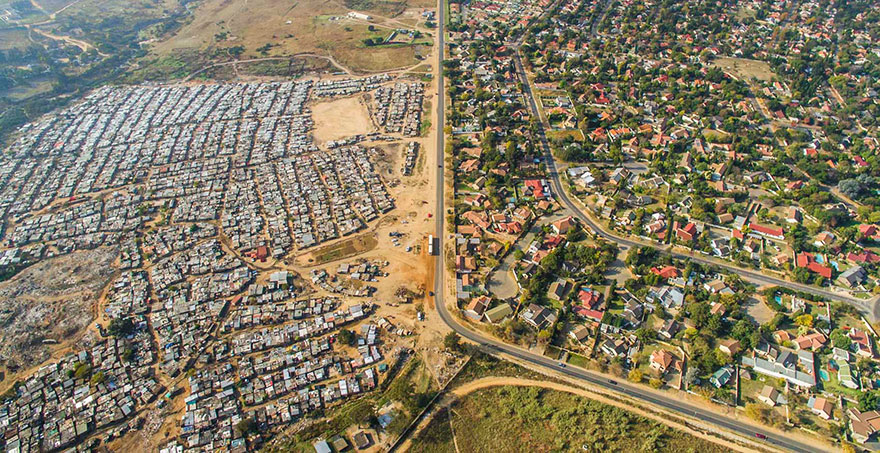 Some cities and areas in this world are particularly affected by such divergences. One of these regions is South Africa. Although Apartheid, the stately organized “racial segregation”, has been abolished for more than 20 years now, you still can’t see a lot of equality or equal opportunities in South Africa. At the times of the Apartheid regime living spaces in South Africa were strictly segregated, which had a tremendous impact on the planning of cities and on the architecture. Very often streets, rivers, walls or specifically planted forests were used as barriers between these zones. In the Apartheid era this segregation was omnipresent, no secret at all and clearly recognizable at first sight. We could assume that today this isn’t the case anymore. It’s normal for a city to have poorer and richer districts even in Europe.  But the photos Johnny Miller took with his drone show us that since the Apartheid regime many things haven’t changed as they should or could have and that the boundaries between the rich and the extremely poor are very thin. Often they’re only separated by a fence or a road. From a bird’s eye view this reality becomes even more evident.

Lush golf courses are thus very close to “slum” areas where there’s no running water. Luxurious apartment resorts with well-maintained gardens and swimming pools are side by side to tin huts, piles of garbage and clay roads.

During his studies the American photographer spent some time at the University of Cape Town. In that period he got in touch with the bizarre way of city planning during the Apartheid era. When he bought a drone he got the idea of highlighting the contrasts in Cape Town from a new perspective, that is, from above. For his work he didn’t only receive positive feedback. Nevertheless he continued. We’re all aware that South Africa isn’t the only country in the world where such inequalities do exist. Johnny Miller also went on traveling to show this discrepancy between rich and poor and to present the issue as what is actually is, as a global problem. You can find more photos and all the information about his project on the Unequal Scenes website.

“My desire with this project is to portray the most Unequal Scenes around the world as objectively as possible. By providing a new perspective on an old problem, I hope to provoke a dialogue which can begin to address the issues of inequality and disenfranchisement in a constructive and peaceful way.” 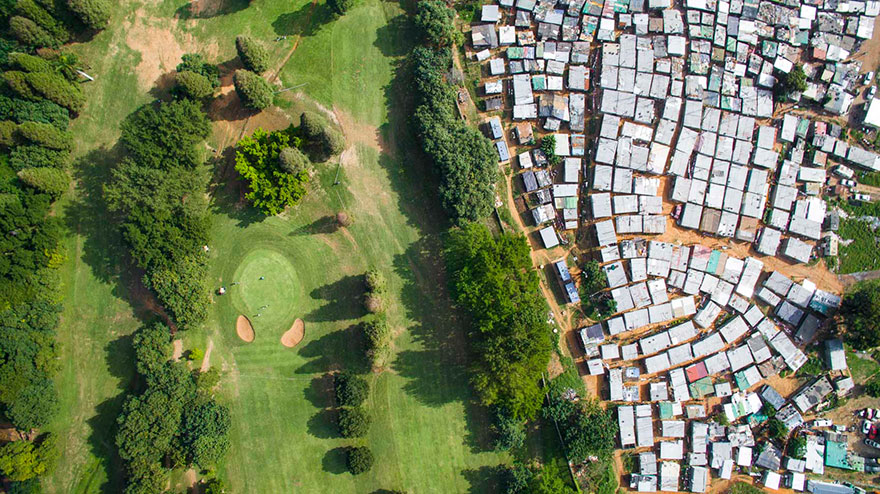