When the week comes to an end, I feel immense anticipation for the free days, especially on hot summer days. I’m looking forward to sleeping long until the sun wakes me up, to a fresh espresso on my balcony, to the life on the streets in the morning, to swimming in the lake and to finally having time to read my new favorite book.

The most beautiful thing, however, is when you plan something special like a picnic with friends in a park in the late morning. And what can be celebrated in a better way than some fresh cake that tastes like summer?

That’s why I’ve been baking tonight. In order to let you join me and maybe also motivate you and increase your anticipation for the weekend a bit more, I’ve taken pictures of the working steps.

Taking photos of food isn’t that easy. Usually you spend hours preparing a nice set. The editorial you may quickly page through in different magazines and recipe books are the results of many hours of precise work.

Today I tried with little additional material to create a couple of visual and authentic goodies. A bird’s-eye perspective, as I also used it in my first photo with the apricots, is very popular for food photography. By using it you can create more depth very easily, play with shades and decorate the set nicely. When you use a frontal perspective, the diverse accessories and foods easily merge.

Most food pictures are also taken with a fairly closed aperture to create a high level of sharpness for the items in the set. Sometimes you can play with the depth-of-field in the background. However, since I also wanted to take some pictures of minor details, I decided to use a narrow perspective and a larger aperture (f/3.5) for both fruit pictures.

That’s why only a minor part was sharp while the rest of it is softly indicated by the depth-of-field. This is how you can make your picture look more exciting in an easy way. 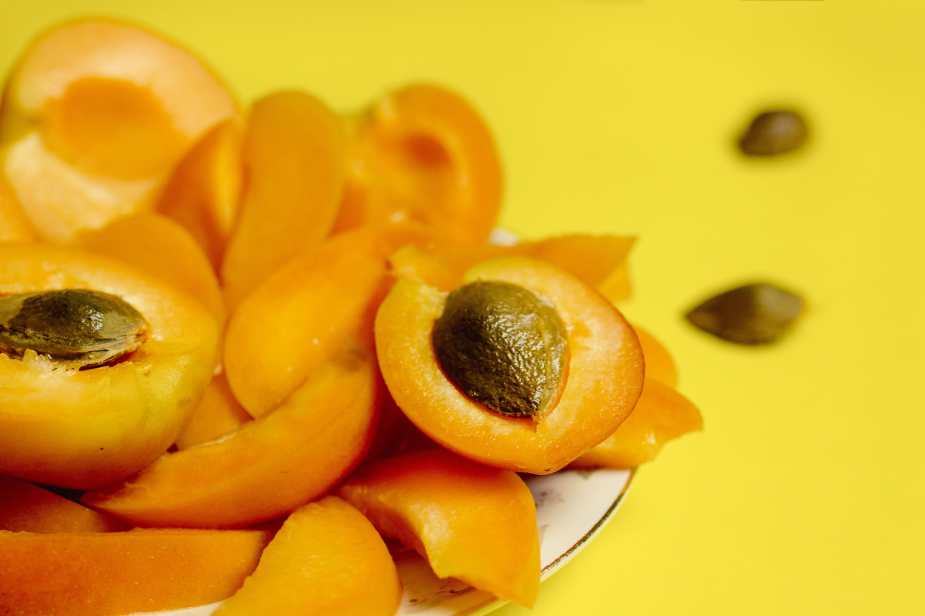 Today I also added a negative photo for you in order to show you to what you have to pay attention.

This picture I took with a wide-open aperture. That’s why it also resulted in playing with the depth-of-field, which however isn’t optimal for this purpose. While the mixing rods come out very clear, the level behind with all the interesting details becomes more blurred. The eggs, on the other hand, weren’t positioned very well. One egg, for instance, rolled under the bowl so only a detail of it is visible. You often notice minor details like this one much later when it’s too late already. That’s why it’s essential when taking food pictures to shoot directly into your laptop with a cable. On a big screen you will immediately notice the flaws hiding on the small camera display very often. That’s how you can eliminate minor errors.

When taking food photos, you can also add some funny aspects and take pictures of the ingredients or the working steps in very unconventional ways. In this case I spread the chocolate drops, which I added as a little surprise to the fruit muffins, in the shape of a smiley – so that even the most unmotivated pastry cook would feel encouraged to carry on.

I took the last picture with the fresh and still very hot muffins by using an aperture that was a bit more closed (f/5). Even here the depth-of-field in the background is clearly visible, which on the one hand makes the image a bit more interesting. On the other hand you can still discover more details than in the previous detailed pictures.

As a background I used a big sheet of yellow paper to emphasize the summer atmosphere even more. Cardboard paper is a very good and cheap option for good surfaces and backgrounds when you want to shoot smaller sets. As a light source I used a flashlight, with brighteners at the sides of the set to make the shades softer.

The lens I use for the pictures was the SIGMA Art 35mm f/1.4 DG HSM. Usually this would be a rather unusual lens for food pictures as you are very limited because of the focal length. But as the set was very small, it was perfect for me in this case.

I wish you all some nice free days and a great time taking pictures outdoors!