Bao what? Some of you may certainly wonder when reading this title. Even I hadn’t been familiar with that name until now. Few of you may know the scientific name Adansonia. One of my aunts has one of these exotic trees in her garden and proudly presents it every time we visit her. However, it would have never crossed my mind that this tree is something very special. Not so long ago I read an article about Madagascar. It said that Madagascans call this tree the “mother of the forest”. The photos taken by Pascal Maitre make us quickly guess why this tree is so important for the inhabitants on that island. The countless Baobabs on Madagascar aren’t really similar to the small tree in my aunt’s garden though. 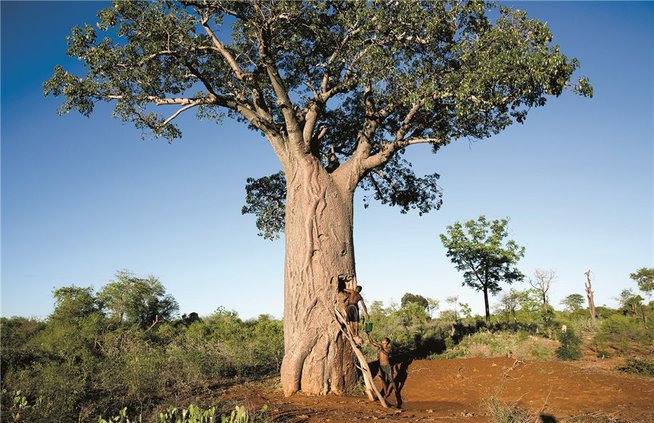 They’re gigantic, majestic and beyond that they’re vital for the survival of the people who have settled around the giant trees. They do not only provide food to them. Their leaves are collected for medical purposes and the cork-tree-like fire-resistant bark serves the people as construction material. In dry periods they’re also used as water reservoirs as the inhabitants make holes in the trees to collect rainwater. The relationship between mankind and Baobab trees, however, is much more profound. Ancient and tall Baobabs in particular are regarded as sacred and said to be the homes of spirits. Religious and medical rituals are often practiced under a Baobab tree and when a giant falls, people grieve for it. As Maitre’s photo series shows, such cases occur more and more often these days. The reason for this is slash-and-burn farming in large parts of Madagascar. Even though Baobabs are resistant to fire, their roots can’t grow anymore on demolished and burnt ground.

I can hardly imagine how tragic it must be to look at a fallen Baobab. For many centuries some of the trees grew up to 40 meters and the tallest of them weigh up to 250 tons.  Pascal Maitre’s photo series once again made me realize how fascinating nature really is and how much it is endangered by mankind. According to research from botanists, Baobabs can grow up to 2,000 years old. Let’s hope that some Baobabs will be able to resist the impact of mankind and keep growing another hundreds of years.