Today I’d like to take you on a little journey back in time and tell you something about the camera obscura.

A camera obscura simply is a dark room with a hole in the wall that is penetrated by light. It’s often used as a metaphor for human perception or the production of images. 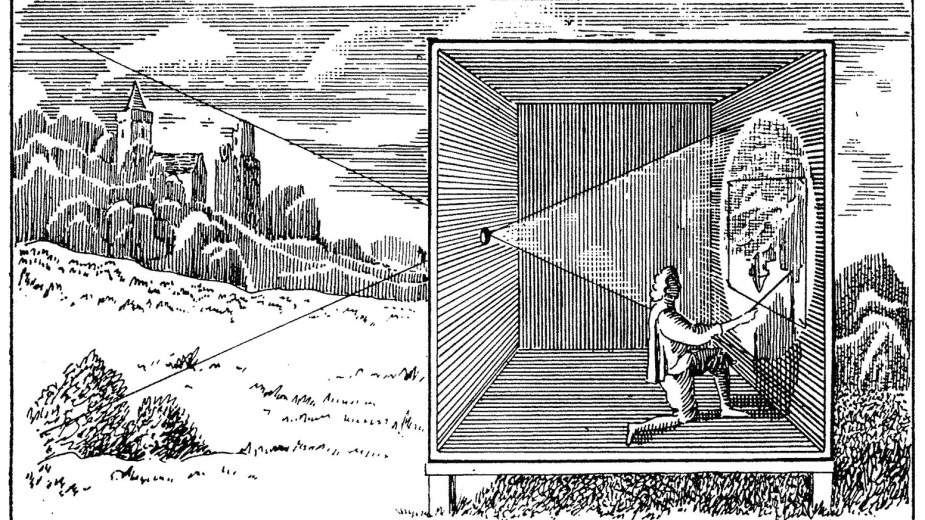 When the dark room is the size of a box we speak of a pinhole camera. The principle of a pinhole camera is part of the oldest knowledge dating back to the prehistory of photography. Aristotle already knew that a light beam which penetrates a little opening from outside into a completely dark room shows everything on the opposite exterior side very clearly. Only Leonardo da Vinci laid the foundations for this particular phenomenon to be applied in practice as well. However, since he made his scripts in some sort of mirror writing, they didn’t have any consequences for several centuries.

In the beginnings of the camera obscura they really were dark walk-in chambers which served painters as drawing aids. In the course of the 17th century smaller apparatuses in the shape of boxes and equipped with lenses were constructed which had a mirror reflex mechanism inside. They cast the images on a glass plate located on the upper side of the transparent box and from which the artist could then trace the image.

And in my next article I’m going to tell you how this revelation immensely contributed to the evolution of photography, what the next steps were and how you can build your own camera obscura.